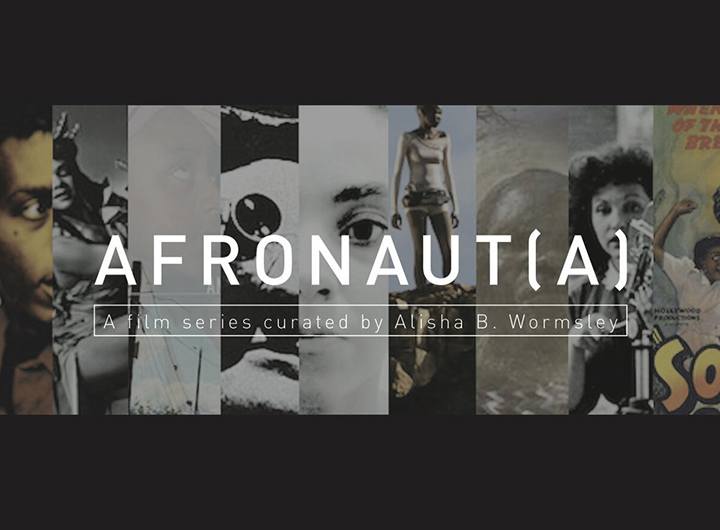 “afronaut(a): a collage of time, travel. the space from the rites to the popular. travels through culture and the moving image. it’s how I navigate through inspiration, identity and creation…”
一 Alisha B. Wormsley

Afronaut(a) is a collection of 9 films, divided into three themed programs from director and artist Alisha B. Wormsley. These three programs 一 Earth / Ancestors, Space, and Sound / Spirit 一 use the surrealist nature of film to ground us to the realities of our lives. Screening as part of Dollar Bank Three Rivers Arts Festival, this cinematic journey transverses the spirit realms of West African fables, galaxies within the cosmos, generations of families, and the borders of man and machine.

EARTH / ANCESTORS is the first themed program of the Afronaut(a) series, featuring the films Kwaku Ananse, Madre Drone, and Souls.

Kwaku Ananse is a traditional West African fable of a creature, part man, part spider, who spends years collecting all wisdom of the world in a wooden pot. As he tries to hide the pot in a tree he can’t find a way to place it high up in its branches. When his little son, Ntikuma shows him the way, Kwaku Ananse becomes so angry that he throws the pot down onto the ground. It bursts and the wisdom seeps away. Everyone rushes over, hoping to salvage what they can. Nyan Koronhwea returns to her father Kwaku Ananse's native Ghana for his funeral. They had long lost contact with each other. She has mixed feelings about her father’s double life with one family in Ghana and another in the United States. Overwhelmed by the funeral, she retreats to the spirit world in search for Kwaku Ananse. She carries her ambivalence with her into the forest, where she learns the ultimate truth about all human relationships.

From Chilean director Patricia Dominguez, Madre Drone depicts an abstract intersection of technology, the environment, surveillance and rebellion. With scant dialogue and a lingering, unsettling ambience, Madre Drone depicts social unrest within South America through the physical and psychological toll it takes on all lives; humans, animals, and the planet itself.

In Souls, director Malakai brings us the story of Kai, a young girl forced to confront the realities of her grandmother’s declining health as a result of Alzheimer’s. Featuring Tabitha Brown, this film is a journey across the stars in the search of hope.